In 2003 we saw the launch of Facebook, which not only offered a platform for the entire world to congregate and share their life with friends and family across the world. It also allowed companies to also participate with consumers, it allowed companies to engage and increase their brand awareness.

3 years later, in 2006 Twitter was launched thus redefining Social Media as we know it by offering people across the world a platform to share their thoughts in 140 characters or less.

Looking back at when these platforms were launched, it is quite amazing how far they have come.

Today the focus is on Twitter, and the effects of what a Single Tweet can have, especially if it is from a renowned news agency like The Associated Press.

What is this Single Tweet that The Associated Press Tweeted?

The Associated Press (@AP) sent out a tweet, around 1 p.m. reported USA Today which stated:

“Breaking: Two Explosions in the White House and Barack Obama is Injured”

Now as you can imagine, a tweet like this can have detrimental affects on not only the United States of America but across the entire world. Especially when you consider the fact that the Associated Press has over 1.9 million followers on their Twitter account.

This Tweet caused the Dow Jones Industrial average to plunge more than 150 points within seconds after the tweet. 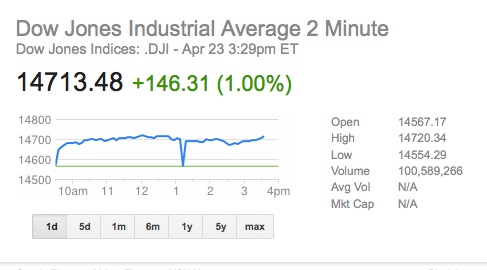 The tweet received over 3,000 Retweets while it was live!

The question that was on minds of the world was whether this tweet was true or not.

With the Associated Press quickly announced that the tweet was false, the declines in the stock market were quickly recovered.

However, it did bring about a great point – Social Media can make big waves in an entire economy from a single tweet.

This goes to show us all that Social Media is not just a social platform. If it was just that, then people would not take what was said on it so seriously. The Tweet had investors spooked, and the end result was a decline in both the Dow Jones Industrial Average and S&P 500 Index. Twitter is a social platform that allows users to tweet their thoughts in 140 characters or less; despite the limitation a single tweet, with 71 character was able to cripple the stock market in a matter of seconds.

In fact, it goes to show why we should all be on Social Media, especially Big Brands. Give yourself a voice and showcase to the public who you are as a company.

What do you think of the Associated Press being hacked? Do you think the world over reacted at their tweet?

The internet is practically overflowing with blogs that discuss marketing in all its forms and offer an astounding variety of advice on how you can...

The past 2 weeks has been extremely eventful for the residents of Toronto, Canada's largest city. Toronto has been pushed back once again reluctantly onto...

From Around the Web: Under Used Google Products, Facebook’s New Metric and more